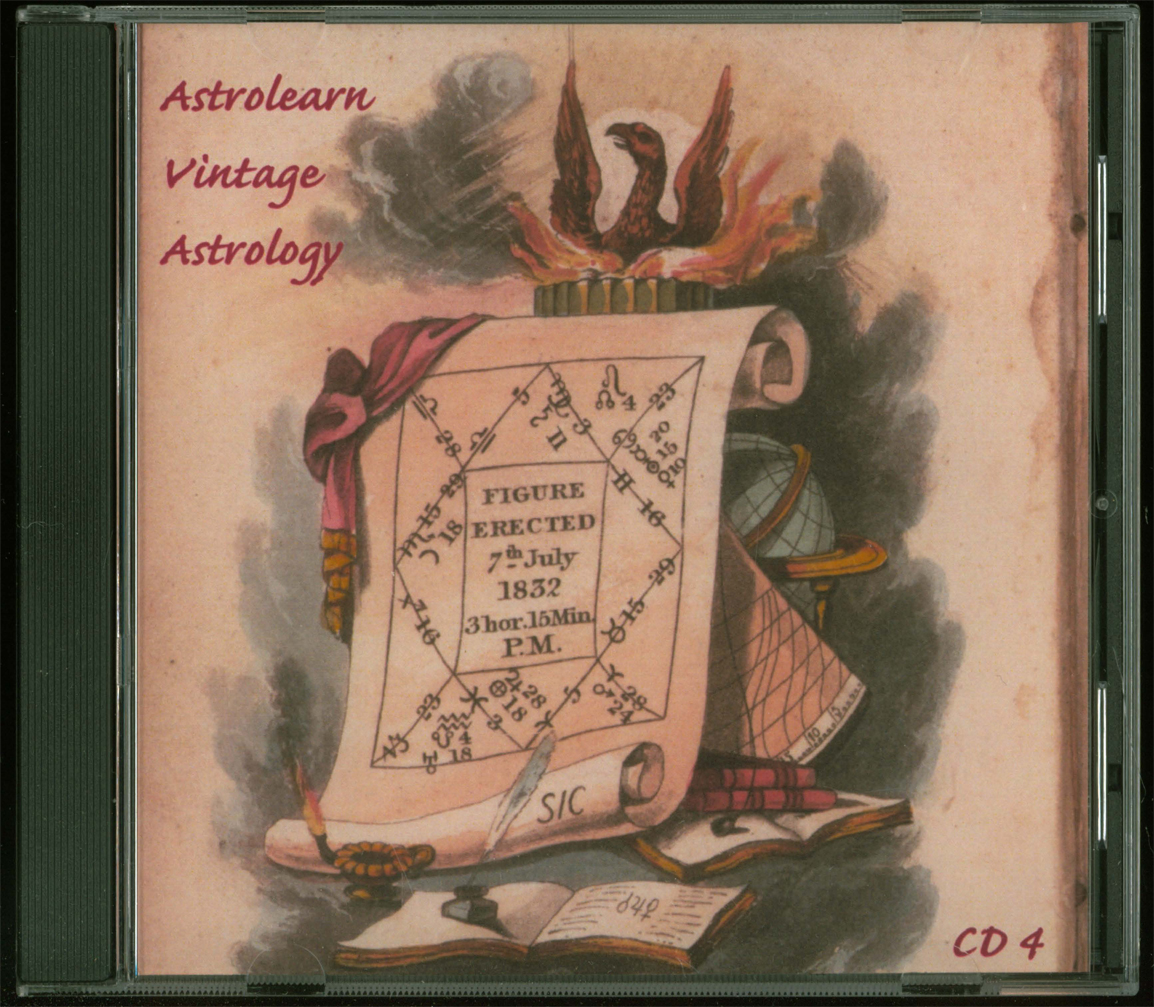 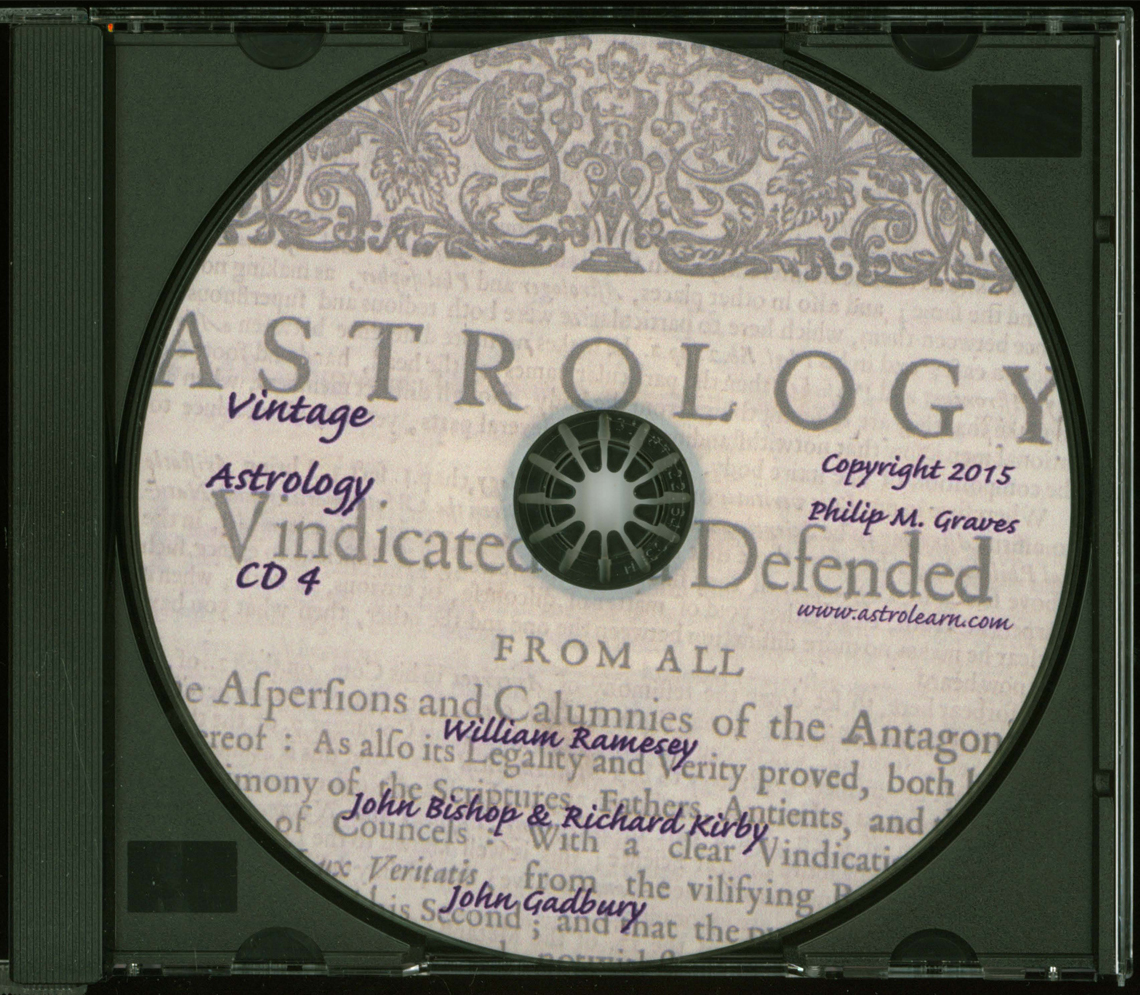 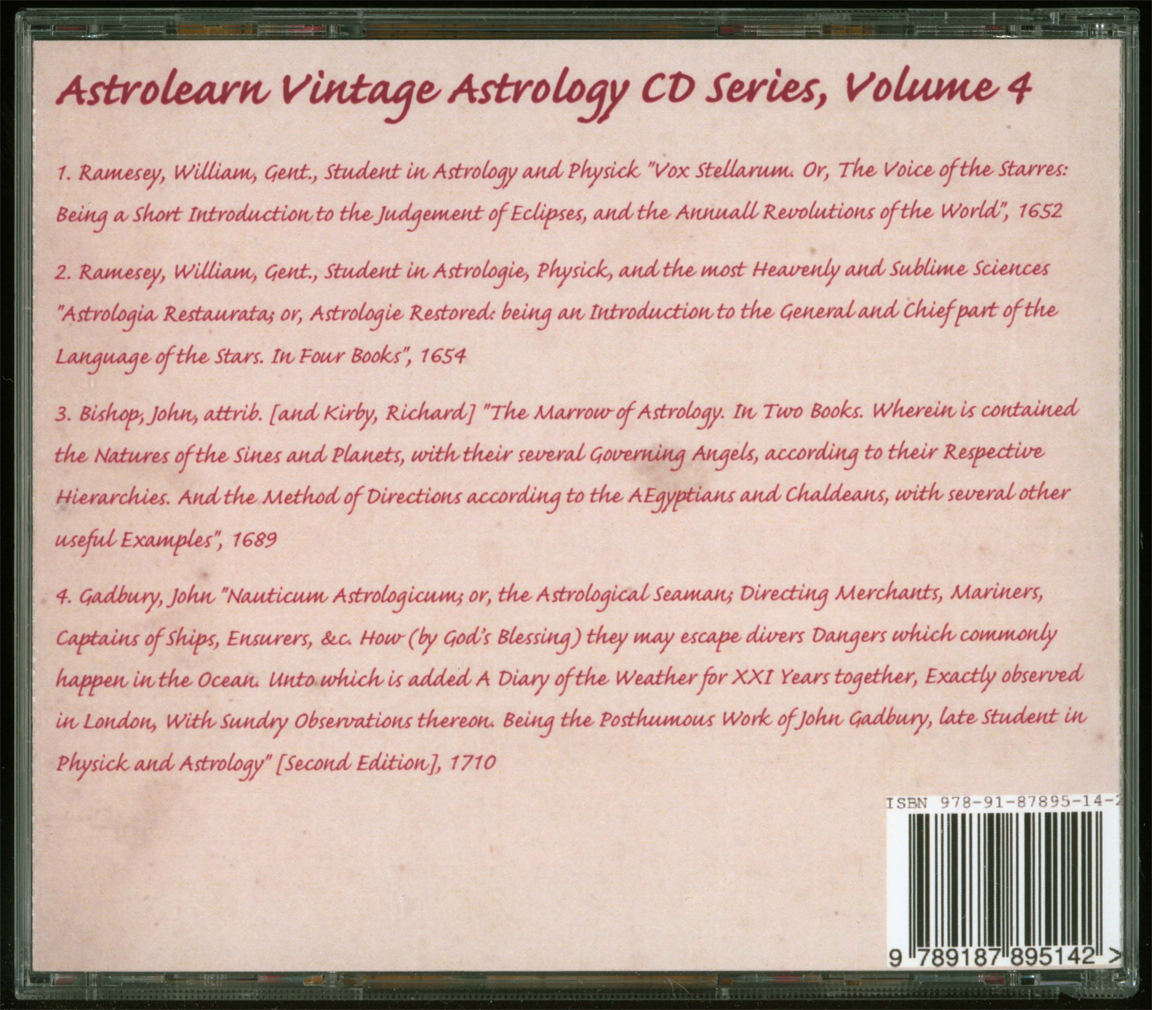 This particular CD contains the scans of four original antiquarian volumes from Astrolearn’s private collection, as detailed below:

[1] With additional sub-title page to Book I: “Astrology Fully Vindicated and Defended from all The Aspersions and Calymnies of the Antagonists thereof: As also its Legality and Verity proved, both by the Testimony of the Scriptures, Fathers, Antients, and the confession of Councels: With a clear Vindication of the AUthors Lux Veritatis, from the vilifying Reproaches of Dr. Homes and his Second; and that the purity of the Science remaineth still untainted, notwithstanding all their Reply”. With additional title page to Book II: “An Introduction to the Iudgement of the Stars. Wherein the whole Art of Astrology Is plainly Taught, and the Ground-work or Reasons thereof for the benefit of the Students therein delivered, the better to confirm them in every point thereof; as also to satisfie such who shall either enviously or ignorantly traduce or cavil against it” Printed for R. W., London, 1653. With additional title page to Book III: “An Introduction to Elections, Fully comprehending The Rules of the Ancients in Electing a Time for any manner of Work: Never beforemade publique in our Mother Tongue. But now (by the Blessing of God) for the benefit of all true Lovers of knowledge sent abroad” Printed for R. W., London, 1653. With additional title page to Book IV: “Astrologia Munda or Astrology in its Purity: Being a Short but Compendious Introduction to the Iudging of the Annual or Yearly Revolutions of the World; by which, as also Eclipses, Great Coniunctions, Comets, and Blazing-Stars Are Iudged (by the ordinary Course and Order of Nature) the general accidents of Countries, Kingdoms, Provinces and Cities, alterations of Kingdoms and Empires, Laws and Customs, cause of Plenty, Dearth, Wars, Peace, Health, Sickness, alteration of the Ayr, and (to be short) of all things appertaining to the life of Man in a natural way; wherein the Infinite WIsdom of God is seen manifestly in the Government of the World by the Influence and constant Harmony of the Celestial Planets and Stars; the Innocency, Legality and Purity o the Art demonstrated, and proved by Demonstration of the Inevitable Events of the Heavens, so long as God upholdeth the order and course of Nature unperverted; And the Students thereof consequently proved rather Divines then Conjurers or Practisers of what is unlawful” Printed by R. W., London, 1653.

[2] The 2nd issue of the original edition, first published 1653. This copy lacks the occasionally-present frontispiece portrait of Ramesey, which appears to be missing from the vast majority (75-80%) of surviving copies that appear for sale, suggesting that it was probably not issued in the first place in most cases. A facsimile of the frontis. is included at the start of the Ballantrae Reprint of the 1653 edition, q. v. below. There was also a 1655 imprint, which is scarcer than either of the first two (photographs of a copy at auction were witnessed by me some years ago)

Back to CD Index Page