From Lilly to Partridge: 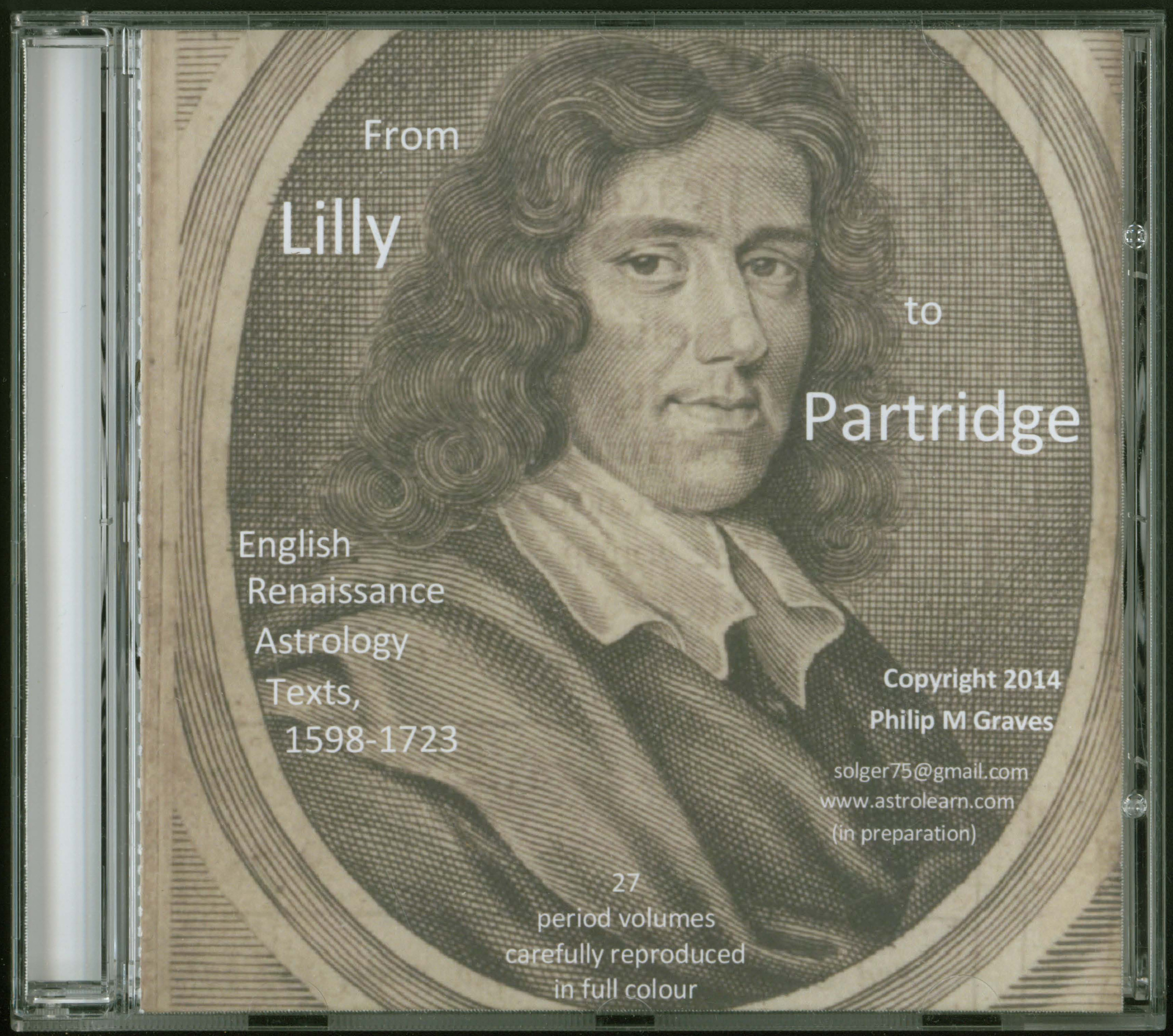 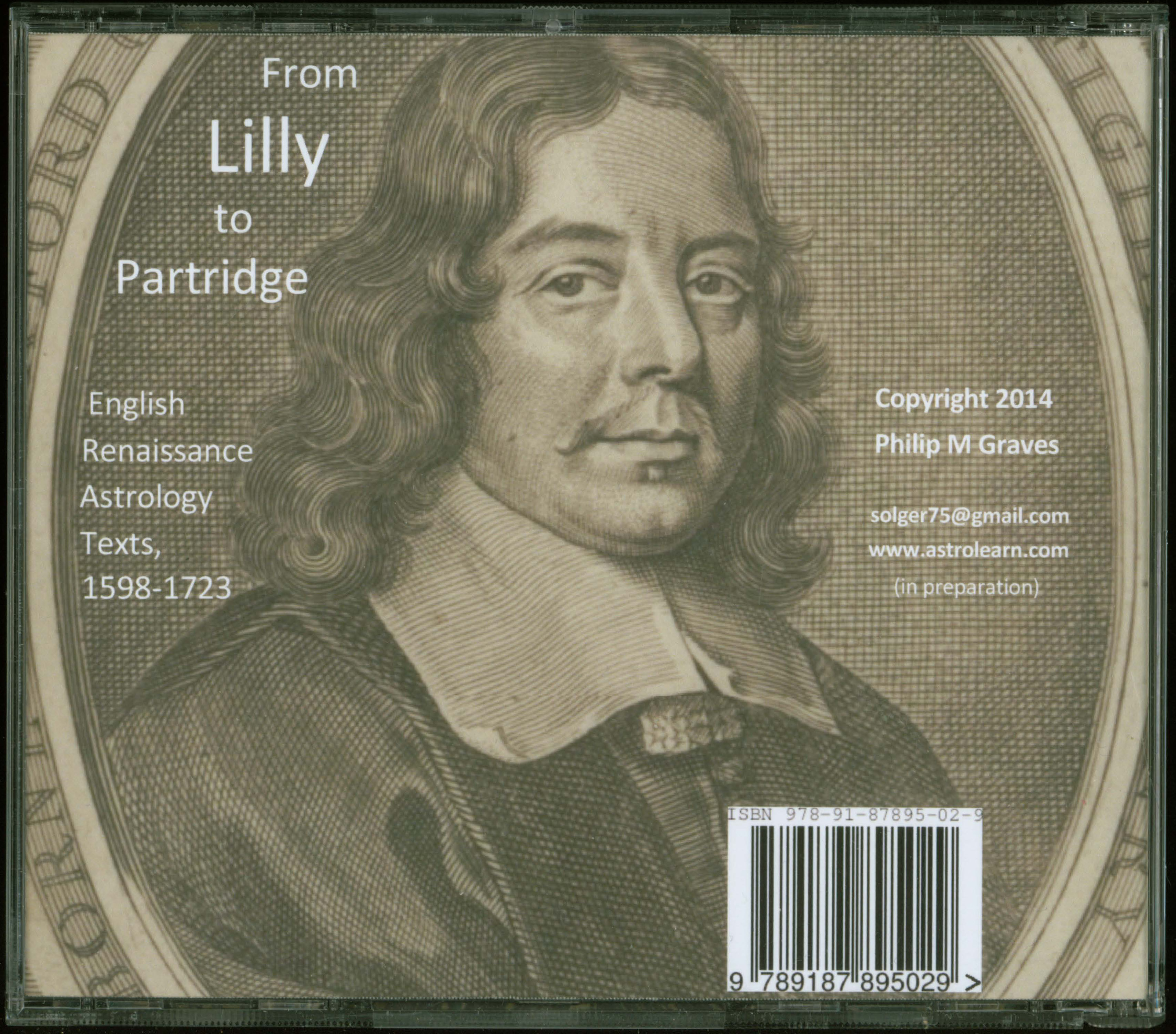 This DVD is the earliest in the series tracking the development of astrological texts in the English language, and is the direct chronological predecessor to ‘From Sibly to Simmonite’. It focuses chiefly on the major text-books on astrology published in English in the period from 1598 to 1723 inclusive. The gap between the closing date for this DVD and the opening date for ‘From Sibly to Simmonite’ is the result of astrological publishing, aside from almanacs, having entered a period of dormancy between the mid-1720s and early 1780s.

Although the earliest text is not by Lilly and the last is not by Partridge, our astrological community peer consultation supported the centering of the title around these two most famous of representatives of the flowering and last stand of the English-language Renaissance astrological text publishing movement.

A full bibliographical checklist of the works included on the DVD, in chronological order, follows. This order is reflected in the numerical order given to the file names. Numbered references to ‘Gardner’ refer to the identification of the work in question in F. Leigh Gardner’s 1911 classic bibliography of astrology ‘A Catalogue Raisonné of Works on the Occult Sciences Vol. II: Astrological Books’, which was especially strong on English-language titles and remains a useful point of reference to the more important portion of astrological books published before 1910, though in terms of comprehensiveness, especially in connection with Latin and foreign-language European works, it has been succeeded by Leandro Cantamessa’s recent ‘Astrologia Ins and Outs’, published exactly a century later in 2011.

[1] The source copy used for Astrolearn’s reproduction of this text lacks the folding table of ‘planetary howers’ towards the end of G. C. book, in common with about 50% of others observed on the used book marketplace these past ten years. A pre-existing monochrome scan of the same book for Early English Books Online contains most but not all of the missing table: the top row and a half of data is missing, as are the headings, and a separate key to the planetary rulers of each hour of each day of the week. To further Astrolearn’s reproduction of the text, the missing table has been retyped from the data presented in the incomplete E.E.B.O. scan, and then completed by rational inference with the missing rows of data at the top, as well as logical column headings for the hours. [NB: The original printed table features a glaring ten-day disparity in the correspondences drawn between calendar date and solar degree compared with the equivalent correspondences in modern times; but it has been pointed out to me by a friend, astrologer Wade Caves, that the calendar dates followed in the late 16th century were indeed ten days off from the equivalent ones in more recent centuries, this difference presumably accounting for the observed disparity. Further, several faulty figures were spotted in assorted individual cells in the original printed table. These errors are plain to see and have not been corrected, instead being carried across unaltered for the historical record.] But without knowing the format in which the separate key was presented, it did not seem appropriate to guess and attempt to reconstruct this too. We would refer readers to the equivalent instructions for calculating the planetary hours in the scan of Lilly’s ‘Christian Astrology’.

[2] Astrolearn’s antiquarian source copy also lacks the preface to the G.C. book entitled ‘To the courteous Reader’; and the illustration ‘On the Anatomie of Man’s Body’ on the reverse of that sheet. The missing illustration is ostensibly of no astrological significance, and was impossible to reproduce without access to an original source copy containing it. We have, however, reproduced in hand-typed text the address to the reader. Most of it was sourced in the incomplete scan of the same page included in the existingly published Early English Books Online scan edition. The final few lines of this page were unfortunately (once again) missing from the E.E.B.O. scan, but have graciously been provided by a British antiquarian book-dealer by transcription on request from their original copy.

[3] Astrolearn’s antiquarian source copy lacks the occasionally-present frontispiece portrait of Ramesey, which has noticeably also been absent from at least 80% of copies of this book to have appeared for sale these past ten years, strongly suggesting that it was not issued in the first place in most copies.

[4] Astrolearn’s antiquarian original lacks the title page and some prefatory pages. It could be the 1658 or 1671 edition, the library records for both of which match its features. It was deemed worth including despite the missing title page and prefatory pages because the main content is significantly extended with new material from that of the first edition, aside from the added short treatise ‘Urinalia’ that was bound in with the editions from 1658 and onwards.

[5] Some original copies of this book are thought to contain a portrait, lacking from Astrolearn’s source, but it does not seem to be found commonly.

[6] Our copy lacks the portrait leaf, but includes the sometimes-missing fold-out table of fixed stars.

[7]  The two leaves comprising pp. 277-280 were lacking in original print in our copy, but their text content had been rendered as typescript and bound in by an early owner. Thus, the reproduction of the text is complete.

[8] This was the second complete edition following the first attributed jointly to Richard Kirby and John Bishop; yet all Kirby’s content is believed to have been retained from the first: he was simply (and ostensibly unjustly) written out of the credits when the book was reissued. Some damage was noted on our original to the leaf comprising A Table of Twilight for the Latitude of 50 and 51 Degrees, fortunately not a significant page. Gardner does not list the present edition, but notes another of the previous year, 1688, which was substantially truncated from the original.

[9] Library records record a 1st edition of 1657, a stated 5th edition undated but believed approx. 1665, a 6th edition of 1670; a 7th edition of 1694; and this, the stated 10th edition of 1704, which is the only one to have been heavily expanded into a lengthy book by George Parker.  A copy of a stated 9th edition of 1696, long unsold on the used book market at the time of writing, is said to run to just 90 pages. It is not clear from the lack of library or online sale records whether 2nd, 3rd, 4th and 8th editions ever existed in print, but until and unless firm evidence emerges, the suspicion will remain that the edition count was inflated. For now we can say with certainty only that there were six editions, of which five containing only Eland’s work, and the last that of both Eland and Parker.

[10] Our original of this, the 2nd edition of Lilly’s autobiography after the first of 1715, was slightly damaged by an early owner’s small burn hole through one leaf, with loss of several words of text on pp. 27 and 28. The affected sections have been retyped from a scan copy of the 1822 edition, since the text is unaltered from that of the edition of 1721 in this section, although it has been stylistically reformatted and reset. We have included the retyped lines in the original format of the 1721 edition on a leaf inserted between these pages in our reproduction, so the text as presented is complete. The 1721 edition, unlike that of 1715, was bound in with a reprint of Lilly’s ‘Several Observations on the Life and Death of King Charles’, first published under a fuller title in 1651 according to Gardner. This is included in our scan.

[11] In common with Eland’s Tutor to Astrology (see above), this was an early 18th century reworking and major expansion by George Parker of a relatively short 17th century astrological text. The original work in this case was Ball’s much shorter ‘Astrolo-Physical Compendium; or a Brief Introduction to Astrology’ of 1697, which had half the page count.

Back to DVD Index page