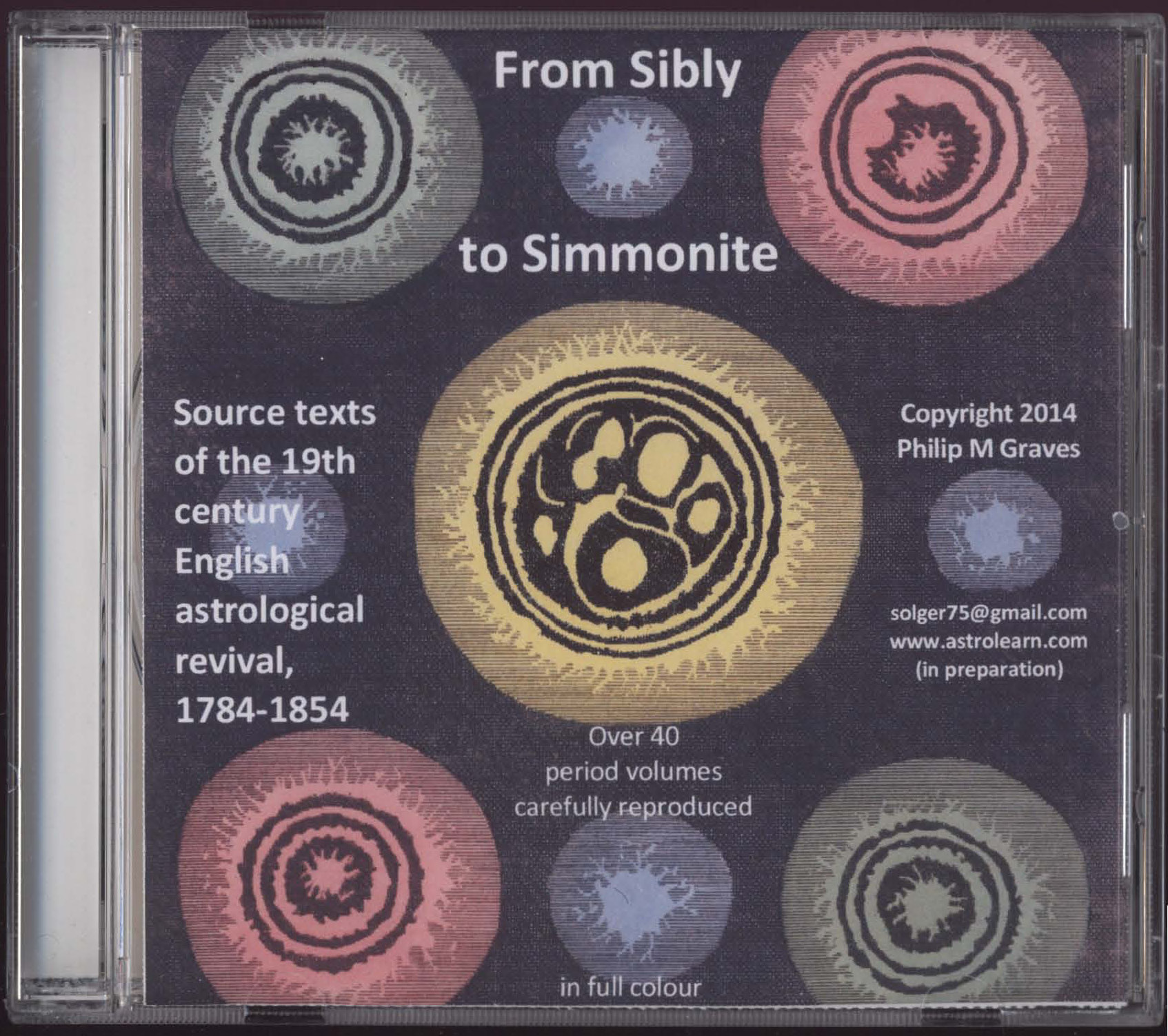 This DVD focuses on the texts and journals of the revival in astrological publishing in the 19th century after a period of general neglect and decline in the 18th. This revival was led from England in the 1780s, and all but one of the texts on this DVD are British in origin (the exception being the work of Bowron, which was published in the United States of America). The texts on this DVD span the 70-year period from 1784 to 1854 inclusive, and include nearly all the important English-language astrological sources from that period, with the exception of almanacs and a small number of rare journals and books that have proved altogether elusive during the period of Graves’ collecting.[1]

A full bibliographical checklist of the works included on the DVD, in chronological order, follows. This order is reflected in the numerical order given to the file names. Numbered references to ‘Gardner’ as with the first DVD above before.

Some publications from 1854 itself were carried over to the eventual sequel to this DVD, ‘From Cooke to Pearce’ (see separate page).

[1] Prophetic almanacs and sources of peripheral interest to astrology, such as Raphael’s ‘The Royal Book of Fate’, ‘Raphael’s Witch’ and ‘Raphael’s Sanctuary of the Astral Art’, which are essentially divinatory games, have been set aside for a future collection or collections. Likewise a small number of foreign-language sources from the period in question.

[2] Note that Gardner lists the same work twice under its variant titles, but confusedly gives the earlier title to a later printing of 1817 and the later title to an earlier one of 1790.

[3] [NB: Four leaves missing from Graves’ antiquarian original had to be retyped from other sources; the retyped sections have been inserted at the appropriate place in the text.]

[4] [Note: one leaf was missing from Graves’ antiquarian original and had to be retyped from a scan kindly supplied for a fee by the Warburg Institute in London. The retyped leaf has been inserted at the appropriate place in the text.]

[5] [Note: a small number of minor pages were missing from Graves’ antiquarian original and had to be retyped from other sources; the retyped pages have been inserted at the appropriate places in the text].

[7] Internally consists of a complete set of the periodical ‘The Straggling Astrologer’ with its original pagination and invididual issue dates included. Lacks pp. 319-20. Unfortunately, Graves was unable to gain access to source material that might have allowed him to replace these missing pages in typing.

[9] [Note: inserted after the title page is a side-by-side comparison of the frontispieces from two different original copies, worth noting for the marked differences which show that they were coloured by hand, with some variation though essentially according to a fixed recipe]

[11] Substantially enlarged and significantly edited and altered from the first edition; please compare the two files closely for revealing insights into Morrison’s development of the text

[12] The true first edition, predating the undated one published by Simpkin, Marshall & Co. in London, given as Gardner 1178