Within the past month, an additional resource of printed astrological literature has joined the astrology library I developed on site here in South Wales, UK.

This is known as the AA Archive, and is owned by the Astrological Association of Great Britain, the main national organisation representing astrology and astrologers in the UK since 1958. I have been a member of the AA continuously since the summer of 2009.

The AA Archive consists of a large number of books and periodicals for which there was no shelf space at the official AA Library in South-East Cornwall, England.

I offered to provide storage for this resource when it became apparent that the AA’s current contract on a lock-up storage facility was about to expire at the end of August 2020, and the President of the AA, Roy Gillett, asked me whether I might have space for it, perhaps a garage.

I don’t have a garage, but the alternative would have been the AA continuing to pay for commercial storage but in a new facility elsewhere, so I had to give serious thought to whether I could make space for about 84 boxes of books in the same house as my astrological library.

In my opinion, it is much better for books to have proper air circulation so that they do not get damp, and to be stored on shelves rather than in boxes so that they do not suffer damage from insects and from lying awkwardly against each other and at unnatural angles for prolonged periods.

It is also better for astrological scholarship to have printed resources on astrology readily available. And when I was shown spreadsheets detailing the contents of the archive, I could see that they were not common English-language astrological books that would duplicate those already here, and would in fact be a good complement to the resources in my library for research purposes.

A major part of the AA Archive is the AA’s entire holdings of books and periodicals in modern European languages other than English – including French, German, Dutch, Italian and Spanish titles.

Another part is the AA’s holdings of English-language astrological magazines other than those it publishes and those published by the Astrological Lodge of London. (A run of The Mountain Astrologer was also available, but I asked for this not to be sent because there is already a complete set in my library.)

An additional, smaller part of the Archive comprises printed ephemerides, tables of houses, atlases, and birth data collections – the kinds of books astrologers relied upon heavily before they started to use computerised chart calculation services, and still valuable as reference material!

So I worked out a plan to make shelf space available for it on site here so that it would be accessible to visiting AA members as well as immediately usable by me personally for historical research. This was accepted by the AA board, and arrangements were made to move the Archive here soon afterwards.

Within a couple of weeks of its arrival, I ordered ten new IKEA Billy bookcases and constructed eight of them in an upstairs room and the other two downstairs. The entire Archive is now shelved here on eleven bookcases, between them comprising 66 bookshelves.

The eight new upstairs bookcases now holding most of the AA Archive are in their own dedicated room that did not previously have books in it at all, while the three bookcases holding the remaining portion are in one of the existing library rooms downstairs. 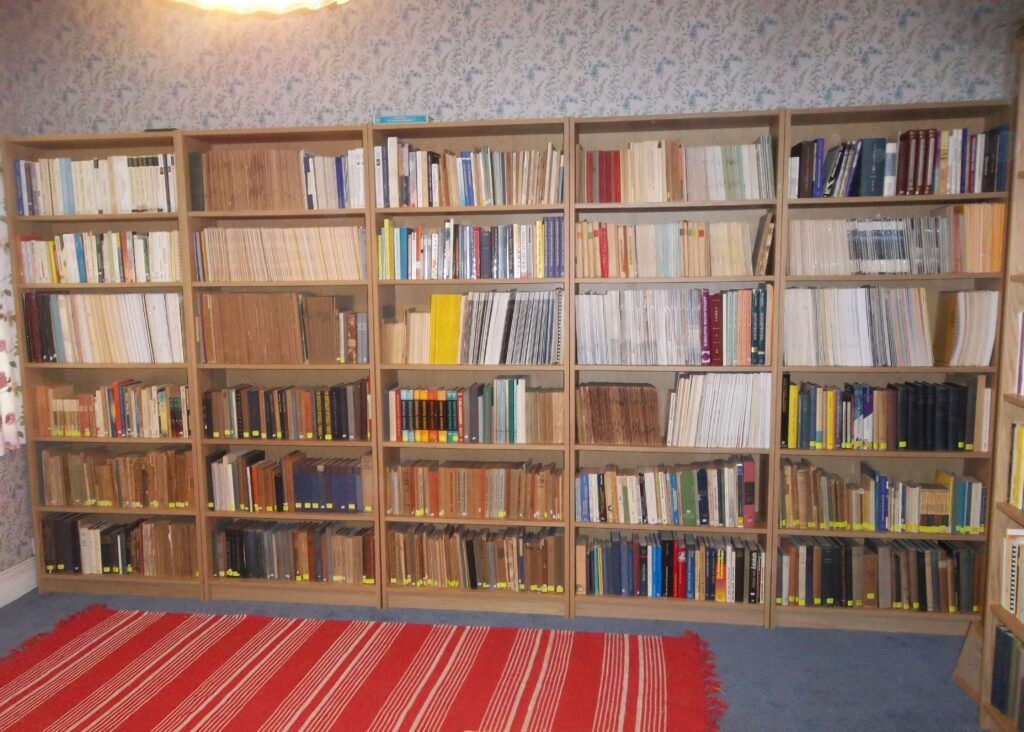 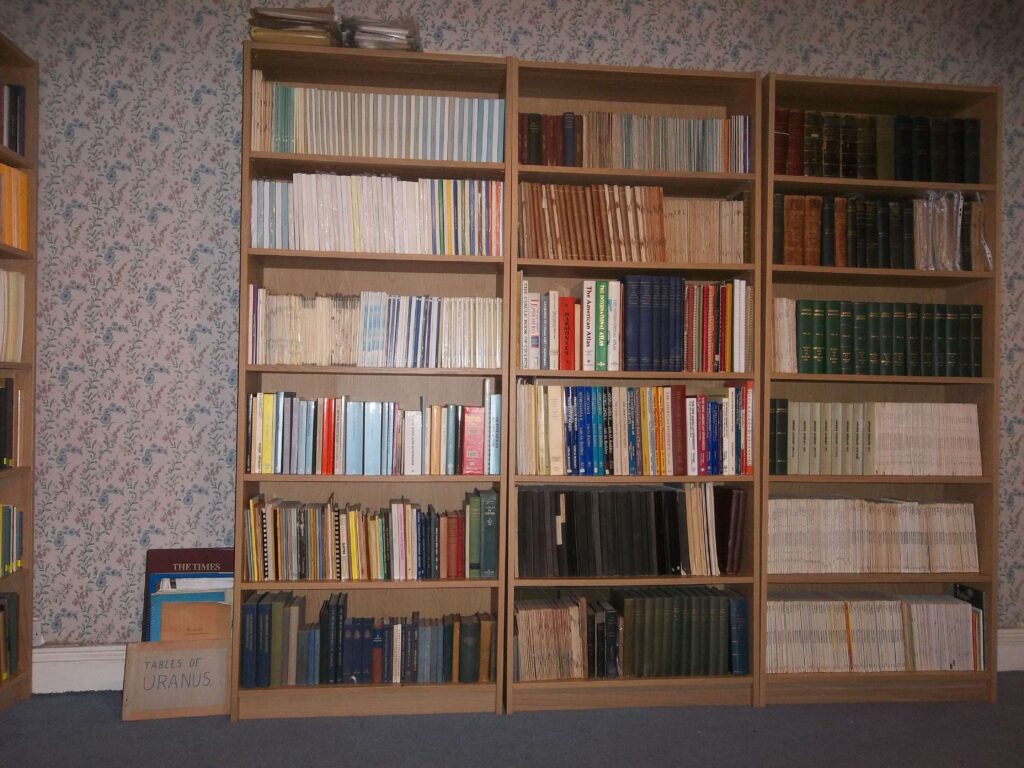 The three downstairs previously held books and magazines from the main library here, but these have been moved to parts of other bookcases to make space for the AA Archive since the early summer. The two new bookcases downstairs helped considerably in the reshuffling process! 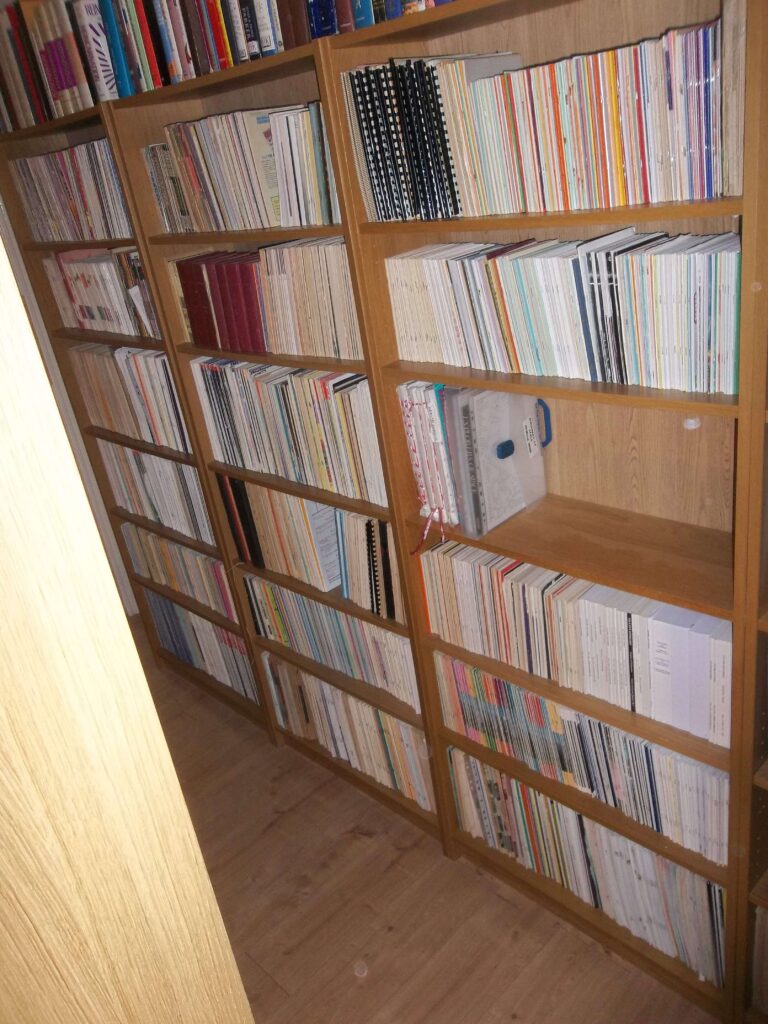 Once everything had been sorted and shelved, I went back to the spreadsheets with details of the holdings, and noted all periodical titles of which at least forty issues are present in order to illustrate the strongest research resources of a periodical nature in the Archive. These are as follows:

There are additionally many other periodical titles of which smaller numbers are held.

All these details have already been sent out to AA members in the first instance. Now that this has been achieved, I wanted to publicise the developments at Astrolearn too so that non-members who might be interested in accessing these resources are aware of them and perhaps might also consider joining the AA themselves as members.

Because the Archive has only just arrived within the past month and is mostly in a room that was not used for the library here before, there is no table or suitable seating in the Archive room just yet. This is something I plan to get in place by the end of the year, along with other improvements such as shelf labels.

Because of the ongoing situation around Europe with transmission of the novel coronavirus, I would generally not want to encourage visits other than for urgent research until mid-2021 when vulnerable members of the population should have begun to be offered fully approved vaccinations, but I also want those wishing to conduct research that makes use of these resources to be able to plan ahead to a time when the pandemic has been brought under control to within acceptable levels of public safety.

My plan is to carry out my own cataloguing of the Archive next year in a format compatible with the catalogue of the main astrology library on site here, and to distribute this to the AA in the first place, and post it on Astrolearn in the second instance.